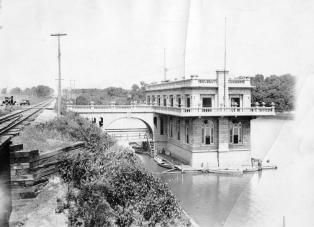 Before the pump house was built, there was just a stretch of marshy, flat prairie. I was only thirteen when the crews moved in to build the place, but I can still remember games of tag with my brothers in the tall, humid grass that once grew there. Back then, before we were old enough to help out in our family’s store, we spent our days running wild. We knew every bend and twist in every road and creek around town. We saw everything.

And so when Mr. Staley’s pump house was built, we looked on. We watched from across the train tracks as concrete was poured into the ground, four walls took shape, and elegant arches emerged around its perimeter. We watched as rough, burly men carefully fitted fragile pieces of glass into those arches. A couple of years later, we looked on with awe as hoards of men worked to dam the Sangamon River, giving us a lake. The pump house became an island on the lake.

It was stunning. Stunning and powerful. Down below, the pumps worked nonstop. A constant whirring, moving millions of gallons of water from Mr. Staley’s lake into his mills. The pumps emitted a constant hum. It was the sound of industry and progress. It was the sound of money. It was a powerful if vulgar operation. But the top half of the building hid the lower half’s vulgarity, countering it with grace and beauty. It was a light, airy space for the people of town to use. A place that brought people together. It’s where I met Tom.

We didn’t actually meet at the building. That world was too fancy for us. Instead, we met at an impromptu party under the trees just down from the pump house, which was shining like a beacon on the lake that evening. We were drinking. Someone plucked amateurishly at a ukulele. One of the guys built a fire that crackled in the cool September air, threatening to give away our whereabouts. But it was delightfully cozy and worth the risk. Mostly, I just remember Tom, who was laughing, a pink flush in his cheeks. He wore a comically large green scarf around his neck.

Later that night, he and I sneaked away from our group, our shoes crunching over the gravel along the train tracks.

He slipped his hand into mine and told me in a way that was both sheepish and bold, “I think maybe you’re the one, Martha girl.”

There was music and laughter coming from the pump house, voices rising and falling, flickering light.

It was a cloudy night, the moon hidden from view, yet we still darted from shadow to shadow as we made our way across the delicate bridge to the building’s graceful balustrade. My footing was careless because I was tipsy, and I stumbled into the ledge. I laughed for no reason, giddy. And then we peered into the great, beautiful space of the pump house’s banquet room. It exuded warmth and happiness. There were couples dancing, friends laughing, people enjoying slices of cake smeared with a thick layer of frosting. Tom and I glanced at each other and then back through the window. I felt the warmth of his body next to me as he put his arm around me and kissed the top of my head. We stood there in the shadows, humming along to the music.

A year later, we were married.

On our second anniversary, we had dinner plans across town. We drove along the lake’s edge, the trees blazing orange and red as the sun dipped below the horizon. There was a distinct sharpness in the air. Winter wasn’t far off.

We were both so relaxed that evening, he in the tweed jacket that made him look so distinguished and I in my deep blue dress with metallic triangles embroidered at the collar. We talked about the World Series game we had heard the night before.

Tom was saying, “If the Giants had been able to—”

That was it. The last I heard before the sudden, violent crack. There were screeching tires and a shocking, icy cold as our car veered into the lake. I don’t remember panicking. I don’t remember pain. There was a profound heaviness and a tingling behind my eyes

And then, quite suddenly, there was nothing but unfathomable lightness. I was hovering somewhere over the lake, knowing I had died but not knowing where I was exactly. My vision darted around at impossible speeds. One moment I was over the lake, watching the water churn where our car sank deeper into the muck; the next moment I was traveling around town: watching patrons file into the movie theater where Tom and I had recently seen a picture, at my old high school, at the clothing store downtown, at the house I had lived in as a child. My vision moved as if undirected by me. As if searching for something of its own accord.

You see, I’m entirely alone here. I haven’t seen Tom since that day, and nobody at all has seen me. Though I can see the living, they are blurry, like breathing blobs of water. I’m unsure if this is what the afterlife is like for everyone or if I’m being punished. There has been no explanation. No guardian angel to tell me what’s going on.

These many years later, I’m still here, moving around town, deeply lonely. But when I go back to places I knew during my life, it’s as though I’m back there again, in my own body. I spent a lot of time in my old high school before they tore it down. I tried to stay in the bungalow with the green shutters where Tom and I planted our flower and vegetable gardens. I lurked at the fence where the sunflowers used to track the arc of the sun across the sky, but the wrecking ball came for that sweet house too. The patch of dirt that once nourished tomatoes and zucchini has been paved over for decades. My childhood home, white clapboard with a postage-stamp sized front porch—the happy home where I wrestled with my older brothers and cooked dinner on the cast iron stove with my mom almost every night—was demolished long ago.

And so, out of necessity, I’ve settled in the pump house. When I’m here—watching the sun rise and set over the lake, watching the seasons turn the world from white to green, green to orange, orange to brown—I can still hear the music from that night so long ago when I met Tom. I can feel the warmth of his arm around me and see the light bouncing off the silverware on the tables inside. This has become my home. My hallowed place.

There are signs that this old building will go the way of so many other old buildings in this town. Cranes rip these buildings limb from limb to make way for strip malls and parking lots and drive-thru restaurants. These new places are all foreign to me. I don’t belong in such places. But then again, I don’t belong here at all anymore.

Perhaps once this place is demolished I will be freed from this lonely in-between world. Perhaps I’ll sink down beneath the silt of the lake and find the memory of that patch of tall grass where I once played with my brothers. Perhaps there, in that memory, I’ll see the glint of that summer sunlight from my childhood, and it will lead me to where I need to go.