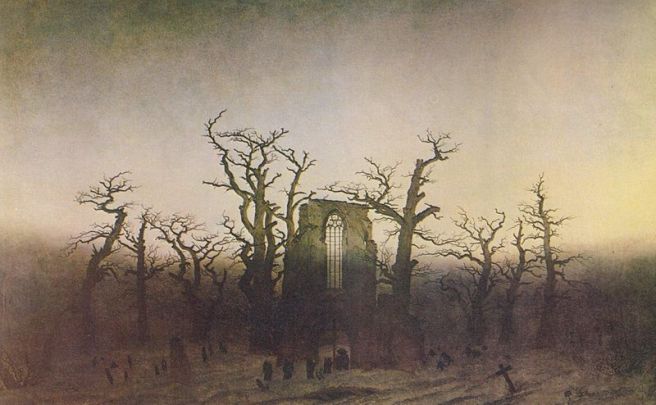 Caspar David Friedrich might be my art history soul mate. On a surface level, I think his paintings are perfection to look at. Their austere, northern landscapes speak to me. The gnarled, bare trees suggest weathering and time and realistically imperfect stories. Friedrich captures the fleeting, eerie quality of transitional light. The sky can only cast that specific glow for maybe five minutes before it either starts to darken into a deep blue or brighten into a clearer light.

At the same time, the ponderousness of time and its inexorable power over each of us seems to shout from the canvas. This dance between transience and permanence keeps me coming back to Friedrich again and again.

But I find the above image, Abbey in the Oakwood (1810), to be especially poignant in January of 2017. Set within Friedrich’s striking natural elements are the remains of an abbey, which I find is a fitting metaphor for my world circa 2017. All that remains of the abbey is one vertical section of wall, with an arched doorway at ground level and the remains of a lancet window above. You can imagine the grandeur of the building that once stood here. Stained glass! Tall ribbed groin vaults! Surely there were colorful marble tiles on the floors and shiny gold reliquaries housed in delicately carved protective niches. Now all that remains is crumbling, the glass from the window is gone, and the ruin is being overtaken by the tall oak trees that surround it. Ashes to ashes . . .

If you look closely, you can see signs of humanity. A procession of monks moves through the doorway with a coffin. There are headstones scattered around in the bare snow. Friedrich really underscores his message of decay and ruin with these details. And like the ruin that rises above them, these elements are incidental to the image. They are overshadowed by their environment, which is timeless and unconquerable.

I wonder about these plucky monks. Why are they still here? Why have they not moved on to another abbey? Somewhere warm and safe. Did they stick around to see the final collapse of this last fragment of their abbey? Are they giving in to the powerful forces around them? Or are they holding on in the hopes of rebuilding what was lost?

Even if the forces of decay are winning, their effects are mitigated by the inherently regenerative qualities of nature. Winter will end and the snow will melt. The sun will rise and warm the world below. When the first flowers push up through the earth, and buds of green appear on the oak trees under a warm spring sun, I imagine that someone will be working to repair the damage and fix what was destroyed. If not the monks, then someone else.