So I watched Pretty in Pink last night and fell newly in love with Duckie. If you’re of my generation, this probably means something to you. If not, well…

As a child of the ’80s I have always been taken with the films of John Hughes. Sixteen Candles, Pretty in Pink, The Breakfast Club, Ferris Bueller’s Day Off. I was just an elementary school kid when these movies came out, but I had older sisters who were just slightly younger than the angsty teen protagonists. And these movies helped define my sense of society. So when John Hughes died unexpectedly in 2009, I—and a lot of my peers—felt that a sort of symbolic door was being shut on the je ne sais quois that defined our childhoods. A. O. Scott’s obit in the New York Times put it well: Hughes’s movies “capture — with a winning mixture of optimism and melancholy, with a generosity of spirit tempered by a punitive sense of right and wrong — something essential in the experience of youth.” 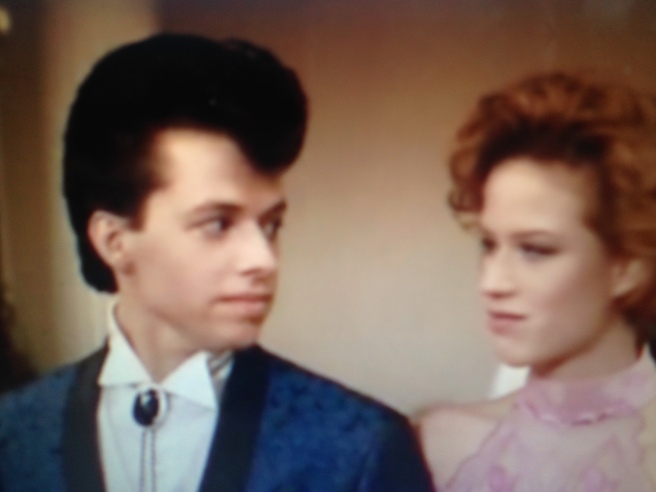 And so. As I was flipping through the channels after putting my son to bed last night, Pretty in Pink was irresistible. I came in as protagonists Andie (Molly Ringwald) and Duckie (Jon Cryer) are doing homework together. For those who don’t know the movie, Andie and Duckie are childhood friends. They’re both outcasts—poor, artsy kids (today I think we’d call them “hipsters”) who go to school with suit-wearing, stock-trading rich kids. (James Spader is at his zenith in this movie.) One of these “richies,” Blaine (Andrew McCarthy), falls for Andie and they start dating. They go to awful parties together, where people mock Andie’s clothing and her general existence. (Did this kind of stuff really happen?) Anyway, Blaine is sympathetic enough, but he doesn’t do a good job of owning his affection for Andie. He’s certainly no John Cusack in Say Anything.

Meanwhile, Duckie is secretly carrying a torch for Andie. By the end of the movie, Blaine has stood Andie up for the prom, but Andie goes alone (in a self-fashioned pink number!) to save face. And here is where the movie gets me.

Sweet, wonderful Duckie is there for her. Her goofy friend, who is unexpectedly dashing. They walk into the prom together, facing a sea of assholes. And there is something so absolutely sweet in their camaraderie. They know they don’t belong—they don’t want to belong—yet they’re determined to be seen. There’s a sense that they know their voices matter even if they are drowned out. What sentiment could really be more touching than that?

The movie ends with Duckie chivalrously encouraging Andie to run after Blaine, who has confessed that he’s really in love with her. No! We don’t have any reason to like Blaine very much. But Duckie! My god, he’s a dream! His vulnerability, his honesty, the electricity in his eyes. The way he reassuringly holds her hand (around 0:45) as they turn to face their mostly awful peers, while Orchestral Manoeuvres in the Dark’s “If You Leave” plays in the background. It seriously chokes me up.

Apparently the original ending had Andie and Duckie ending up together, but test audiences wanted Andie and Blaine to end up together. This I cannot understand. Watch the clip for yourself. Blaine is a vacuous “niceguy” who’s so wrapped up in his own social status that he’s not available. And then you have Duckie with his distinct fashion sense, his heart-on-his-sleeve absolute adoration of Andie, his intelligent sense of humor, the way he looks at Andie, the way he reassuringly squeezes her hand. How on earth could you possibly want Blaine when you have Duckie? I query/shout at the TV every time I see this scene.

I think this is one of the reasons Hughes’s films are so great. They’re authentic. We usually don’t make the choices that make sense. We’re motivated by weird forces in our subconscious minds. And of course, love is not a logic-driven emotion. Don’t we always seek the excitement and promise of what’s waiting for us—unseen—around the bend? Don’t we always think we can do just a little bit better? I guess it’s human nature. But I hate to think of the Duckies of the world being overlooked on the chance that something better might be waiting around the bend.

In the immortal words of Orchestral Manoeuvres in the Dark:

We’ve always had time on our sides
But now it’s fading fast
Every second
Every moment
We’ve got to, we’ve gotta make it last
Indeed.