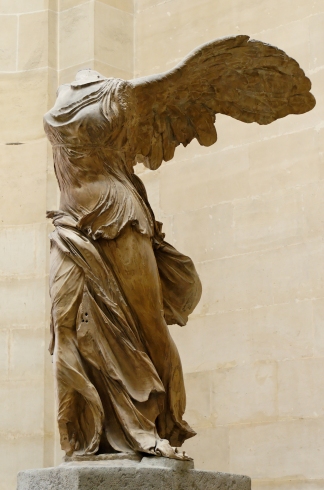 I am hard stone pulled from the earth. For millennia I was pressed and squeezed and heated. My universe was dark and compact. I was limestone, and then as the earth roiled and shifted around me, year after year, millennium after century after epoch, I became what you now see. A “metamorphic rock,” a stunning object—change made static.

As I sat under the earth, gradually recrystallizing, working my way from ordinary to extraordinary, evolution—and later, civilization—roiled above me: shifting continents and volcanic eruptions helped my own evolution, just as humans evolved and animals went extinct in their world above.

I cooked deep inside the island that would eventually be called “Paros,” in the Aegean Sea. And then one day, after millions of years of nothing but pressure and darkness, I was hit with a violent crack and a blinding light. I was taken from the earth. I was no longer of the earth. I was surrounded by color and light. The world became weightless.

I was brought out of the rocky hillside. There was a cascade of green behind me and brilliant blue sky in front of me. The bright sunshine bounced off me and sparkled on the rolling waves of the sea that stretched out in front of me. Soon I was wrapped in ropes and touched by dozens of warm human hands before finally finding my way into the hands of my ultimate maker. The sculptor.

The sculptor did in a short period of time what millions of years in the earth never did. In the earth I transformed from one kind of rock into another, better kind of rock. But the sculptor . . . He made me human. Or human-like. Unessential parts of me were chiseled and scraped away. I broke free. I gained powerful legs and arms and broad, soft wings. I had a beautiful head with wind-lashed hair that tangled around my neck and shoulders. I have a torso that twists, with a soft, fleshy belly button and heavy breasts. I once had a mouth, a powerful mouth, and lips that shouted out in victory. My sculptor placed me on a boat that he sculpted at a sanctuary in Samothrace, and I called out in victory there for years.

My voice continued to carry across the windy cliffs, as my body, springy with the euphoria of victory, embraced the wind and the sea and the sun, my clothes an eternal spiral of excitement. Although I no longer look out from the sanctuary in Samothrace—no longer feel the breeze move across my supple skin—the spirit of that place is in me. Just as I am still in Samothrace. I am still shouting, still smiling, light of foot, wings stirring. I am just about to settle in to my ship at the sanctuary. I am still there. And it remains within me.

I once was hard stone pulled from the earth. But now I am human. I am so very, very real.