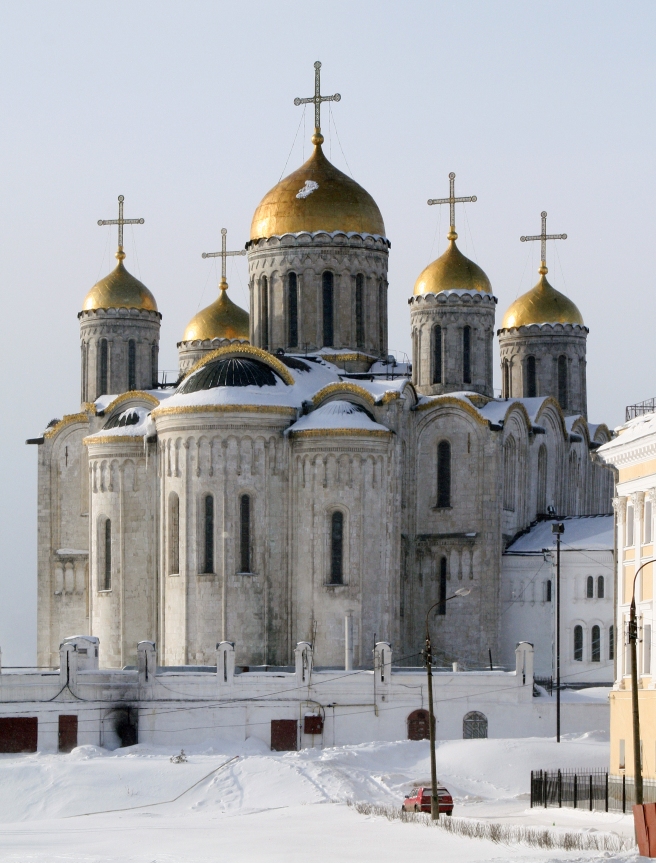 Its stone walls stood sentinel on the tall embankment overlooking the Klyazma River, which wended its way sluggishly through an ocean of marshy green meadows. One end of the building swelled away from them toward the sunrise like an overripe fruit ready to burst. The other walls stood erect and prim, a musical rhythm in their rounded tops.

As the small party rode toward the church, their horses wheezy with fatigue, the golden domes greeted them like five small suns shining in the pale blue sky. The building was the center of an endless universe of green and blue that spread out on all sides.

The sound of their boots scraping the dirt disrupted the immense quiet, and a black-clad monk peered down at them from one of the narrow windows of the upper gallery. He darted back into the shadows as soon as their eyes met his.

“Look! It’s Nestor,” her husband joked. The monk Nestor was a chronicler who had told the story of his people hundreds of years before. Maybe their story would be worth recording, too, she thought.

She heard voices from the nearby bell tower and looked up to find a pair of figures moving amid the pale stone of the tower’s upper levels. They were dressed in black like their brother “Nestor.” Even though their voices were just a murmur, she could identify a few distinct words: knyaz and kolokol. Duke. Bell.

The ancient bell chimed, sending a pair of gray birds out from under the eaves of the tower. The sound rippled out toward them, making the beads on her kokoshnik jump. The horses pranced sideways shaking their muzzles as if to cast off the bell’s reverberations. The light reflecting off the metal rings in their bridles sparkled.

The sound hurt her ears, rattling something deep in her head, but it was also spectacular. It was the universal sound of God and of beauty. It was the sound of the impressive fortifications humanity had constructed in its desperate attempt to keep away the world’s insistent darkness and silence .

It was a beautifully defiant sound. We are here! We aren’t scared of you!

She was scared, of course. A knot of uncertainty and chaos gnawing at her gut. But the sound of church bells was one of the few antidotes to that gnawing. She smiled faintly as she looked into the cloudless sky.

As the bell quieted, a monk emerged from the shadowy arched doorway in the portico of the church and beckoned their group in. Her husband gestured to the old man stooped behind her. He was squat and sturdy, his face deeply creased. But his steps were the confident steps of a young man. He clutched his satchel under his left arm and walked toward the old building.