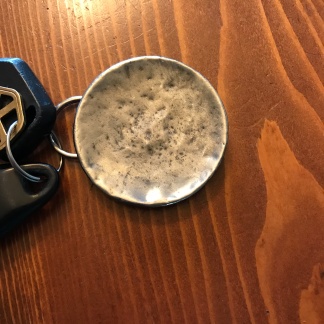 I sometimes like to say that I got my husband for my birthday. Because I really kind of did. He was wrapped in a big red bow of collegiate flirtation and alcohol and deliciously young exuberance. This key chain with bottle opener is a constant reminder of the start of our relationship. Of the storms we have weathered, individually and together. It is something I see and touch every day. It is ugly, I guess. But it is something that means a lot to me. It connects me to . . . all of our history.

In my senior year of college at a tiny hilltop school in Ohio, I noticed a boy at a party. It was weird that I had just noticed him, because he ran in social circles adjacent to my own, and our college had a famously tiny student body that hovered around 1500. So it was rare to see a face you didn’t know. But there he was. He was in all black (I’m sure) and wearing his distinctive Buddy Holly glasses. He was cute, but I wasn’t immediately smitten. I just introduced myself to him and we made idle chitchat. I remember I was wearing platform sandals with red sequins (really) that I had bought in Capri during my semester abroad in Rome. We talked for a while and moved on with our evenings.

But then I noticed him around. At the dining hall reading Wittgenstein’s Tractatus Logico-Philosophicus (really), at a Halloween party dressed up as a German artist (really) where he recited the one line of German he knew. Something along the lines of “Can I borrow your moped?” There was something about this guy that was different from the other guys at my school. He seemed smart, but a lot of people at my school were smart. But he also seemed artsy—and not everyone was. He wasn’t in a frat and he wasn’t an athlete, as so many guys at my school were. But more to the point, he seemed in a sense not to belong, as though he were an outsider at this school. Most of the students at our school were from well-to-do families whose lives had put them on a trajectory to studying English literature in the Gothic buildings on our isolated hilltop campus. I myself felt like an outsider whose trajectory didn’t make sense. I recognized the same quality in him. He was the first person who seemed like me in that way. I wanted to know more about him. And so what started as an innocent awareness of this Buddy Holly glasses wearing artist kid who read philosophy in the dining hall turned into a real crush. I’m told he noticed me too.

And so for my twenty-second birthday, my friends threw me a surprise(ish) party, and he came. To hear him tell about that night is pretty funny. He was told he should come to this party because this girl had a crush on him. He was nervous and drank too much. (A lot too much, I believe.) By the time he came to my party, he probably should have been calling it a night. But romance called. And he felt he should give me a present. So: He grabbed the funny key chain and bottle opener decorated with a picture of the Swedish group Abba that he had ironically bought on eBay. He gave it to me. I remember him singing “Strangers in the Night” in my general direction as I walked away with some friends later that evening. He was funny.

I don’t remember much else about that night, honestly. It wasn’t that memorable, except that I remember talking and talking to this boy who seemed different. And funny. And cute. There was a vulnerability to him that came through at once and hit a soft spot in me. I learned that he was still reeling from the suicide of his father three years earlier. As a result, he exhibited a combination of the deep sadness and anger you might expect with the ebullience of a college student eager to be a real grown up.

We paired up pretty much instantly. After graduation I moved back to my parents’ place in the Bronx and he moved back to his mom’s place in suburban Philadelphia. We made trips to visit each other until he moved up to my roach-infested slum in Queens the following year.

Over the years, the plastic that covered the key chain (that bore the image of Abba) slowly peeled away. Now it’s a nice smooth disc with interesting dings in its surface. I love the way it feels in my hand. I like the recessed square in the back that I can tuck my fingertips into. I’m told that some adults have nice key chains from places like Tiffany’s. Leather and silver fobs and the like. I honestly cannot imagine such a bland, impersonal thing.

The dings, the peeled decoration, the perfect weight and texture—they are all such delightful metaphors for our relationship. The key chain is quite imperfect, just like the two of us. But it’s interesting and fun and I would much rather have this than a nice perfect fob from Tiffany’s.

And if you’re ever out with me and need a bottle opener, I’ve got you covered.

5 thoughts on “No. 5: Key Chain and Bottle Opener”